The London boroughs were created at a time when decisions on transport were driven by very different policy priorities and in a very different environment to today.

Roads and the rise of the commuter

In the 1960s, the population of the capital was being reduced as a matter of national public policy in response to overcrowding of the 1930s and the experience of the war.  The first wave of new towns was still very much in progress with the establishment of new towns such as Harlow on the Essex Hertfordshire border. The Greater London Council (established at the same time as the London boroughs) had a programme of its own new towns at places such as Ashford and Andover. While the emerging new towns saw substantial movements of population out of the capital, work opportunities remained firmly in London, leading to a massive increase in the numbers of people commuting into the capital on a daily basis.

The transport strategy, both in response to this extra commuting and more generally, was focused and singular – build more roads. The roads planned were very much based on the Abercrombie Plan of 1945 with a maze of motorway ring roads around London, although financial restriction meant that only some – such as the Westway and the East Cross Route – were actually built.

Initially, there was not much controversy about these policies.  New towns allowed slum clearance and significantly better living conditions, car transport was seen as the way of the future and, the automotive industry was one of the largest employers in the country. Many Londoners were employed at one of the largest car plants in the world situated within the new London Borough of Barking and Dagenham.

With time, however, local opposition to individual plans grew, and the London boroughs - while they had few actual powers over transport - often reflected this local opposition. An increasing number of campaigns in the sixties opposed the impact of motorways on local communities particularly in highly built up areas of London. Some residents had their bedroom windows less than two meters away from the motorway and there were signs on blocks as commuters drove by saying ‘Get us out of this hell'.

At the same time, the Beeching Report and other measures to try to make the railways profitable led to a reduction in trainlines and stations, including some significant closures in London. Londoners campaigned against these closures with some success, stopping British Rail’s planned closure of the North London Line, which now forms an essential section of the London Overground. The Snow Hill Tunnel was not so lucky with its track being lifted in 1971. It is now back in use linking the north and south sections of Thameslink.

In 1974, the GLC was still committed to building ring roads and a battle ensued, particularly around plans to have a motorway ending in Covent Garden. Local residents launched a campaign to stop the plans, which added to the increasingly political nature of the debate around transport in London.

Londoners’ experience of the road building programme and their response to plans for more motorways crystalised in the Homes before Roads campaign of the early 1970s. This played a major part in the GLC elections of 1974 where Labour campaigned on a ticket to stop the motorway programme. They won and the programme was scrapped.

There was, however, still no fully worked out alternative for how to manage transport in a city the size of London. The GLC did start the process of better planning for public transport - maintaining bus routes rather than scrapping them and re-investing in the underground - but these measures did not amount to a strategic response to the transport challenges of the city.

The concept of subsidising public transport was novel and politically contentious at the time with many continuing to believe that public transport should be run ‘profitably’.  No matter how unpopular, the motorways did appear to offer a credible response. But when Horace Cutler took control of the GLC in 1977 and attempted to restart the motorway schemes he was met with even greater opposition. The plan to build a Docklands Southern Relief Road would have meant the bulldozing of the town centre of Greenwich – residents mounted a successful campaign, which stopped this in its tracks.

While boroughs had few responsibilities for roads, they did take actions that mirrored what Londoners wanted and campaigned for. Merton developed roads to take through traffic away from Wimbledon. Kingston too developed a ringroad around the town centre.

These actions, rather like the tentative developments at the GLC, suggested the green shoots of a strategy for transport in London that we might recognise today.

A new strategy begins to emerge

When Ken Livingston took control of the GLC from Horace Cutler he started to build on some of the earlier policy developments. In particular a reduction in fares by 25 per cent to increase use of public transport, a shift from point-to-point fares to a zonal system, and the introduction of the travelcard and then Capital Card all ratcheted up investment in public transport. In the face of a lot of opposition from transport professionals, these were successful schemes that nowadays we take for granted.

The London Lorry Control Scheme, which still exists today, was introduced to reduce the impact of road transport on residents. There was also the investment in underground stations and lines, with the first stage of the Jubilee Line and renovated stations including at Tottenham Court Road where the Eduardo Paolozzi murals became the subject of another campaign by Londoners seeking to preserve them.

Another famous staple of transport in London, the capital's Freedom Pass, was created by the GLC in 1973.  When the GLC was abolished in 1986, responsibility for the scheme passed to the London boroughs who have funded the much loved discretionary travel pass for older and disabled Londoners ever since.

The abolition of the GLC could have prompted a significant shift in transport policy in London. That it did not is partly due to the challenge of solving a complex transport problem through a massive road-building programme in a democracy.

While the boroughs were split along party lines by the abolition, they were united by their opposition to a new scheme – this time from the Department for Transport – for a mass of motorways across London. Three motorways were to converge on Wandsworth Town Centre, and Dalston was to be a new spaghetti junction. The Tory-led London Borough Association and Labour-led Association of London Boroughs joined forces to oppose the plans.

The plans were to be consulted upon over the Christmas of 1989/90 via a series of public meetings. The boroughs and London MPs met with the Secretary of State for Transport Cecil Parkinson to oppose the plans with the objective of buying more time. With local elections due that May the government did not want to give way, but was prepared to accept that senior civil servants responsible for the plans should attend the meetings, rather than consultants as originally planned. The meetings turned out to be true London-style residents-in-arms affairs showing the massive scale of opposition to the plans across all boroughs and all political parties. The plans were abandoned and no government has suggested a similar solution to London’s transport challenges since.

With the GLC and the Department of Transport’s motorways now firmly ditched there remained a major challenge of developing a coherent policy for transport. There was no money. The capital did not have a transportation system that met the needs of its people. There was no pan-London authority. What was to be done?

In the early 1990s a consensus around transport policy in London began to develop. The boroughs had increasingly begun to see their role as developing places where it was good to work, live and do business. Their transport priorities reflected this and, to some extent, built on their earlier experiences of re-routing traffic away from town centres and campaigning for better bus services to support them. Boroughs recognised the need to manage traffic better and introduced new traffic management schemes, including bus lanes.

Cycling had only become part of the GLC’s transport strategy at the later stages of its existence with a commitment in 1984 to spend 1 per cent of the transport budget on cycling. Transforming a road network dedicated to cars to one that made it safe and fun to cycle was to be a major task. Boroughs began to introduce the first cycle routes in the capital and to promote cycling as a healthy alternative to car use.

Better traffic management also involved better management of parking, to protect residents, reduce congestion and accidents, and provide spaces for loading and unloading.   The first parking meters had been introduced in 1958.  The 1968 Transport Act introduced traffic wardens to control them, and although the initial intention had been for these to be managed by local government, a last minute change of mind gave traffic warden duties to the Metropolitan Police.

Parking control was, however, not seen as a priority by the police and it became an increasingly fraught issue, particularly for residents of inner London boroughs who resented commuters driving into the city, causing congestion and pollution, and parking outside their homes.

The boroughs' response was to introduce controlled parking zones that protected residents' ability to park close to their homes. As the Metropolitan Police did not have the resources to police these effectively, two boroughs - Westminster City Council and Tower Hamlets - introduced their own parking wardens, the costs of which were covered by the charges for controlled parking zones.

A successful campaign emerged to transfer parking enforcement from the police to the boroughs, which occurred in1993.  Boroughs quickly introduced many new schemes, mainly in response to residents’ concerns. As with many parking control measures, these were both welcomed and controversial. While residents could be guaranteed a parking space, this came at a cost.

The 1990s also saw the continuation of dedicated bus lanes, and the introduction of Red Routes, which further curbed unrestricted parking in favour of getting traffic moving. But despite these improvements the lack of a strategic authority was a severe handicap on the development of the city’s transport infrastructure.

It was therefore decided that responsibility for transport across the city would rest with the newly created post of Mayor of London. Transport was a big issue in the first Mayoral election, with Ken Livingstone standing on a platform of introducing a congestion charge.

Today the boroughs continue to work with the Mayor and Transport for London, placing particular emphasis on ensuring that transport relates to places and the people that live in them – transport for Londoners. This work includes collaborating with train operators to improve areas around suburban railways to create safer, more pleasant environments. It also includes developing local cycle networks, as ‘Boris Bikes’ - once a novelty for inner London - have caught on and are spreading beyond central London. And as Londoners continue their love affair with the car - now using cars that can be booked on an app and opened with a credit card - car clubs look like they may be the next big thing in London’s transport. 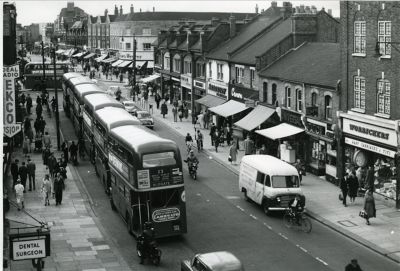