Such was the challenge for the London boroughs when they assumed their powers and responsibilities on 1 April 1965. London has always been a city of change and in the mid-1960s the 'Londoner' was being rapidly remade. Over the next half a century London would become one of the world's leading capitals of cultural and racial diversity.

In the middle of the 20th century one in 20 Londoners had been born outside the UK - a tiny fraction would be black or of Asian origin. By the 1990s 1.35 million black and Asian origin Londoners accounted for just over one in five of the Greater London population. Successive waves of social change reshaped the communities of post-war London; anti-discrimination movements were finding traction as the London boroughs pioneered their own approaches to the promotion of tolerance and cohesion in their own diverse communities. Difference was now the unifying trait between Londoners.

The story of the boroughs has been marked by key themes in the pursuit for equality.

The early years of the boroughs were dominated by race relations. The convictions of pioneering voices across London local government and decades of multi-agency collaboration lie behind the integrated racial and cultural diversity experienced in London today. Increasing global connectivity, the declining Commonwealth and shockwaves from world events brought new neighbours to the streets of London. This meant change, and with it came unease.

The 1970s was a decade when extremist politics rekindled the fear and mistrust of newcomers. It also saw the regrouping of the far right in the new National Front and crop-haired youngsters styling themselves as skinheads in a series of opportunistic and organised attacks on London’s Asian communities.

The London boroughs responded by working with their communities to promote tolerance and cohesion. This is particularly true of festivals that began to be held annually in streets, parks and estates. The London boroughs, alongside local politicians, community groups and residents, worked tirelessly to involve all corners of the community.

Broadwater Farm and its aftermath

The 1980s saw a series of inner-city riots. In 1985, PC Keith Blakelock was the first police officer since 1833 to be killed in a riot in Britain after a day of unrest on the Broadwater Farm estate in Tottenham. One week earlier, Brixton had seen its second riot in the space of four years. These events exposed divided and strained communities.

Inner London boroughs such as Haringey and Lambeth were facing challenges not seen elsewhere. Socio-economic disparities, high levels of population churn and ethnic diversity demanded a new approach to eliminating discrimination and promoting equality. Haringey’s pioneering stance on race and equality – now very much the institutional mainstream- was shaped by the context of the late 1970s and early 1980s when the borough’s growing ethnic minority population experienced discrimination.

At the same time, Bernie Grant, a Haringey councillor and later MP for Tottenham was emerging as a strong advocate for racial equality and was a key figure in the search for justice in the aftermath of the Broadwater Farm estate riot. His was one of many voices emerging from the London boroughs.

London local government has long been an important platform for female public figures. The hallways and chambers of London’s borough councils have paved the way for highly successful female peers, Members of Parliament and chief executives who have helped shape the equality debate over the last 50 years.

Baroness Amos, a life peer since 1997 began her career in equal opportunities, training and management services in the London boroughs of Lambeth, Camden and Hackney. She went on to chair the Equal Opportunities Commission, was appointed Secretary of State for International Development and is now serving as the Under-Secretary-General for Humanitarian Affairs and Emergency Relief Coordinator at the United Nations.

Councillor Angela Mason CBE has been a lifelong campaigner and activist who started her career as a welfare rights adviser for Camden social services and then the borough’s principal solicitor. She went on to direct Stonewall, the government’s Women & Equality Unit and was national adviser at the Improvement and Development Agency for local government, where she was responsible for advising councils on equality and cohesion.

Kate Allen started her career at the Greater London Council, Haringey Council and later became a councillor in Camden chairing the Women’s Committee during the 1980s. She now directs Amnesty International UK.

The scale and range of these achievements demonstrate the important role the boroughs have played in facilitating and shaping some of the most influential voices who have spoken out against inequality. These voices challenged institutional discrimination and made London local government an early pioneer in the equalities and diversity field.

It was actually the work of the London boroughs, their partners and committed advocates such as Mike Devaney that improved the quality of life for Londoners living with a disability. Working through groups such as the Islington Disablement Association in the 1980s, London boroughs started engaging with residents living with a disability in a meaningful and responsive way. Discrimination in the form of access and opportunity could be mitigated against by the application of person-centred practice; this ranged from suitable adjustments in their housing to the tools and equipment they needed to navigate the everyday.

Mike Devaney influenced much of the work happening around disability in London at the time. He spent some of his earlier years with the Islington Disablement Association in the 1980s. At this time there was an increasing understanding that the discrimination experienced by disabled people was caused by the way society treated them.

Across London, organisations led by and for disabled people, often supported by the local authority, were appearing in boroughs from Islington to Southwark to Greenwich. Mike was not only a leading figure within this new movement but in 1987 he became the youngest chair of a social services committee as a councillor in Islington and became Head of Disability Policy and Services for the London Borough of Ealing in 1988. For the next six years he worked tirelessly for his ward as a Labour councillor for Islington. As his career continued so did the growth of local disabled people's organisations; many are still going strong despite the reduced funding which local authorities face.

By the late 1980s London’s education system was also changing and integrating disabled people into mainstream education was being pioneered by the Inner London Education Authority. Inclusive education is now synonymous with the wider equalities agenda; regardless of need, inclusive education enables all students to fully participate in any mainstream early years provision, school, college or university.

Really understanding what is happening in their area and responding to that has underpinned the approach of the boroughs in the equality and diversity field throughout the last 50 years. In a climate of significantly reduced budgets across the public sector boroughs continue to work closely with their communities to ensure equality of opportunity reaches all Londoners. That is still the name of the game. 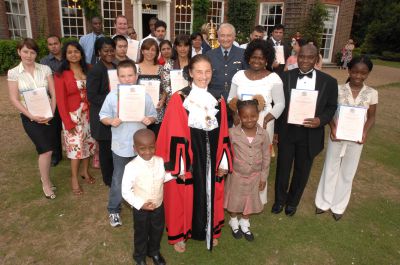