Fifty years ago significant changes were made to the way that London is governed. The London Government Act 1963 swept away the historic mixture of 86 county boroughs, municipal boroughs, urban districts and metropolitan boroughs that had existed in London. Many were combined to form the new boroughs, but in the process old ones were lost like Holborn and Carshalton. It also abolished the former counties of Middlesex and London, and absorbed parts of Kent, Essex and Surrey into London. In all the changes, the City of London continued in its historic role.

The London County Council (LCC) which had existed since 1888 was abolished at the same time and the Greater London Council (GLC) came into being covering a larger area. It gained powers in the reorganisation but was not etablished without opposition from not only the existing LCC, but also many Labour boroughs in inner London and some Conservative County Councils. Some suburban areas near the outer London boundary did not like being either being placed inside London, or left out of the newly formed 'Greater London'.

The 1963 Act led to elections on 7 May 1964 for ‘shadow’ authorities that came fully into power in 1965. Following those elections in 1964, the 32 boroughs we know today came into existence and have existed ever since.  The first local London-wide elections resulted in a landslide for the Labour Party, who won 20  of the boroughs. The Conservatives won nine, and three were under no overall control. Only 16  Liberal councillors were elected in London, as well as 49 residents and ratepayers’ candidates, three independents and three Communists.

This system set the pattern for the next 20 years with two tiers of government in London – local and regional. This lasted until 1986 when the regional GLC was abolished. The powers of the GLC were divided between the boroughs and the national government. The Inner London Education Authority which had been established at the same time as the big reorganisation in 1965 survived as an independent body until 1988 and the outer London Boroughs became the Local Education Authorities for their areas. Following 1988 all boroughs took on education powers. From that point, London was governed by a single tier of local government from 1986 until the establishment of the Greater London Authority in 2000 which re-established the regional level government again.

More recently, additional powers in relation to adult social care and public health have been devolved to local councils and this will allow them to more closely reflect the health needs of their population in crafting public health campaigns.

The boroughs, each now representing between 155,000 and 360,000 people have a crucial role in terms of listening to their communities, as well as reflecting and representing their views. Over the 50 years since 1965, boroughs have been at the head of many different social changes and campaigns as well as a changing and more recently a fast-rising population. Indeed London’s population is now the highest it has ever been since the mid 1930s and this is bringing its own challenges in terms of housing and infrastructure provision. There have been other campaigns the boroughs have taken part in over the years including the issues of central versus local power on rate capping and other government powers, as well as union powers for example.

The boroughs also have to work with the Mayor of London as many of the policy areas overlap as well as make representations to the national government about the pressures that the boroughs are facing. For the future, the boroughs as part of a growing city facing global challenges are playing a proactive role in seeking additional devolutionary powers so that they can help their areas to grow, provide jobs and housing as well as to represent their communities and plan for the future.

The role of councillors

Each borough is divided into between 16  and 24  wards with 629 wards across London in total. Most wards have three members or councillors (although some wards have between one and four) representing the people in that area. Tower Hamlets and Hammersmith and Fulham have the fewest number of councillors with 46 members, and Croydon is the biggest with 70. Overall in London, there are 1851 councillors who are elected every four years to represent the people in their ward. In 28 boroughs, councillors elect a council leader from among their numbers, but four boroughs (Hackney, Lewisham, Newham, and Tower Hamlets) have a different system, in which a mayor is directly-elected by the voters to lead the council. Directly elected mayors are the political leaders of the council and have overall responsibility for council policy and the delivery of services. Mayors appoint a cabinet of no more than 10 councillors and decide their portfolios. The cabinet can be made up of different political parties. Councillors provide an important role in holding the executive to account by examining and questioning the decisions made. Only the full council can decide the budget and annual plans of key services.

In 1969 the right to vote was lowered from those over 21 to 18 bringing in a new tranche of baby-boomers who could now vote for the first time. Some boroughs have also formed youth councils to help engage younger people in local democracy and decision-making.

In addition to the many services for which boroughs are directly responsible for, they also keep archives that collect, preserve and make available historical records, photographs and films of their areas. Many boroughs have also made international links through the town twinning process and been able to share best practise.

Elections are always busy times for local councils with the official; in charge, the ‘Returning officer’ coming from each local authority in London. They are responsible for the running of the elections. In addition boroughs are responsible for keeping the electoral register up to date and run campaigns to increase voter registration. This is very important especially in urban areas like London where some areas can experience a 30 per cent change, or ‘churn’ of population in a year. With the new system of individual registration taking over from household registration and a fast-changing population, keeping the register up to date is a challenge for the boroughs. The last borough elections were held in 2014 resulting in Labour again winning control of 20 boroughs – just as in 1964. The next borough elections will be held in 2018. 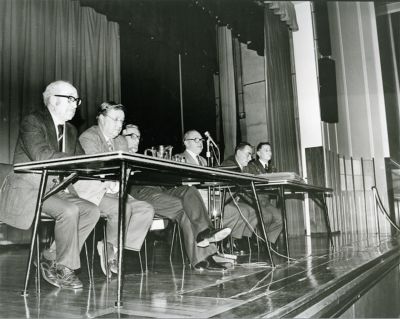