Since their inception, half a century ago, London’s boroughs have delivered, supported and maintained a wide range of culture and leisure services and amenities including: library, museum and archive services; sports facilities; parks and green spaces; heritage assets; and arts activities, events and festivals.  Most of these services are not statutory requirements, but boroughs have recognised their value in supporting the wellbeing, learning, social cohesion and economic development of their areas.

The capital’s libraries have changed considerably over the past 50 years. From quiet places of reading, reference and scholarship, they have developed into vibrant community hubs with cafés, self-issue terminals, banks of computers, adult learning classes, public talks, live music, art exhibitions and children’s workshops. Libraries today are just as likely to be found in leisure centres, schools, health centres or housing developments, as to be housed in original redbrick Victorian library buildings.

The Public Libraries and Museums Act 1964 gave library authorities, including the London Boroughs, a statutory duty to “provide a comprehensive and efficient library service for all persons desiring to make use thereof ”.  With national standards defining these terms not introduced until 2001, libraries developed differently in different areas, responding to the needs of local communities.  In London, this included providing activities and stock in a range of languages to cater to the capital’s diverse communities.

Books have always been at the heart of public libraries, but over the years, London’s libraries have expanded and diversified their stock to include CDs, videos, DVDs, computer games and software.  In the late 1990s and early 2000s, they introduced computers for public use, under the People’s Network programme, and in recent years have been rolling out public wi-fi access.

Borough library services have not been confined to library buildings, but have encompassed everything from mobile libraries and home delivery services, to book swaps in leisure centres and train stations. More recently, as the internet has revolutionised the way people access information, boroughs have capitalised on new technologies to introduce online book sharing platforms and app.

London’s libraries have always been a gateway for information, but have come to play an increasingly important role as service hubs working with other services.  In recent years, they have worked with health services to deliver Books on Prescription, helping people with moderate mental health problems through cognitive behavioural therapy self-help books.  The return of public health responsibilities to local authorities in 2013 has also seen libraries across London offering smoking cessation clinics, arthritis awareness events, screening sessions and fitness activities. Libraries also support local businesses through information, advice and training, and team up with employment support and welfare services to help residents search for work and deal with online benefits information and claims.

Responding to the different needs of their communities and the challenging financial conditions that public services have faced recently, boroughs have adopted different models for their libraries to improve services and make efficiency savings. These have included shared services between boroughs, outsourced contracts, third sector partnerships and growth in the use of volunteers.

Often under the umbrella of library services, every London local authority also maintains an archive or local studies centre.  These archives contain rich collections of local government, business and community records, as well as photographs, maps, and local history books. The archives collect, describe and preserve these materials, making them accessible to residents and visitors to explore their heritage.   Recent years have seen archives catering to a growing interest in family history following the success of TV programmes such as ‘Who do you think you are’. Today, local authority archives are also tackling the digital challenge by responding to demand for more online access to their records.

Like archive services, borough museum and heritage services help communities to explore their past, fostering a sense of community and identity. These services have also evolved over time.   Municipal museums full of stuffed animals, archaeological finds and Victorian artefacts have increasingly been replaced by social and living history brought to life through modern interactive technology. Heritage assets, including stately homes, monuments, memorials and archaeological sites, have been preserved for future generations, and have also benefitted from technological innovations that make them more accessible to the community.

Over the past five decades, London’s boroughs have delivered a wide range of arts and cultural activities; from festivals and town shows, to plays, musicals, concerts and exhibitions in local authority-run parks, theatres, music halls and art galleries.  Some boroughs continue to run their own arts venues today, but many have handed these over to other providers, opting to focus on other areas.

One such area is arts development. Emerging as an idea in the 1980s, arts development has seen the boroughs support and encourage new work across all art forms and genres, including public art, street entertainment, modern dance and experimental theatre, as well as more traditional visual and performing arts. Borough arts advisory services have helped local artists and cultural organisations, as well as community groups, to develop artistic and cultural projects, apply for funding to deliver them, and see them through to fruition.

The boroughs have also increasingly focussed on commissioning participatory arts projects that support social and economic agendas. These include everything from reminiscence arts projects for older people with dementia, to drama workshops to rehabilitate ex-offenders, and from visual arts projects that improve young people’s attainment, to arts-led regeneration projects that revitalise neighbourhoods.

Since their creation, London’s boroughs have played an important role in the provision of community sport and recreation facilities.  These facilities have changed considerably over the years in response to the evolving tastes and needs of London’s shifting population.  From an early emphasis on athletics, swimming and traditional team sports, the boroughs have changed with the times to offer residents things like squash courts, skating rinks and even ski slopes in the early 1990s. In recent years, as Londoners’ pastimes have continued to evolve, boroughs have responded by opening skate parks, BMX tracks and street dance studios.

The quality of local authority sports facilities has improved immeasurably over the years. Cinder athletics tracks have been replaced by asphalt and then polyurethane, grass pitches by 4G all-weather astro turf, and grass tennis courts by floodlit multi-use games areas. These days, there are local authority swimming pools in London with movable floors, and glass walls that frost over to accommodate the needs of Muslim communities.

These changes reflect the changing emphasis of council sports services. In the late 1960s and into the 1970s, the emphasis was primarily on supporting fitness and sporting achievement.  By the 1980s, an emphasis on leisure and fun saw the opening of local authority leisure pools complete with slides, wave machines and fountains. The 1980s also saw a series of campaigns to encourage more people to get active, and the new role of sports development officers emerged to encourage everyone to participate in sport.  In London, there was a particular emphasis on diversionary activities for young people following the race riots of 1981 and growing concern about anti-social behaviour. In recent years, boroughs have focussed on equality of access to sport and engaging vulnerable and disadvantaged residents, as well as increasing physical activity levels as a whole to improve community health outcomes.

Over time, the role of the boroughs has changed from traditional leisure service providers to enablers, commissioners and contract supervisors.  Initially London’s boroughs ran most leisure services themselves, but following the Local Government Act 1988, local authority leisure services were subject to competitive tendering. Leisure centres began being run by private companies and charitable trusts, and today, the vast majority of boroughs have contracted out their leisure facilities to either for-profit companies or social enterprises. 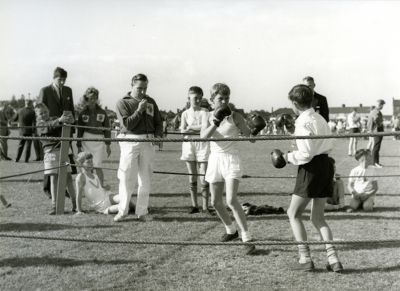